Libya: The Wealth of Sea Resources 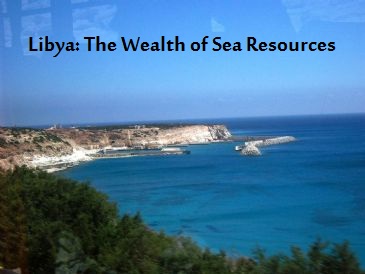 Libya has a lot of natural resources. While the resource of oil is known to the world, the rest of the rich resources that lie along its sea-shore are completely unheeded and absolutely neglected.

Libya has nearly 2,000 km of coastline and the second largest continental shelf in the Mediterranean.

The sea-shores in Libya are a place of great beauty, incredible wonders and amazing mystery. But they, particularly along the cities, do not get proper attention from the government of Libya in their maintenance and magnificence.

The sea-sides in most of the cities, except a few kilometers along the heart of Tripoli, are not sparkling and hygienic. There is no proper facility of lighting as well. Fencing is completely overlooked to safeguard visitors.

The wealth of ocean is important for many reasons to almost all the countries in the world which are graced by nature to have the possession of it. The resources may include food, transportation, recreation, medical sources and energy.

The ocean touches nearly every aspect of life in Libya as approximately half of the population lives near western coastal area. Most of them depend on the ocean in some way or the other either for food they eat, the oxygen they breathe or the fun they make.

Oceans cover almost three-fourths of the earth’s surface. The oceans’ water, the air above the sea, and the land beneath them contain enormous energy resources. It is also an important source of jobs and revenue for individuals businesses and communities.

Many people in Libya believe that sea resources may contribute essentially to the economic, social, and ecological well-being of its citizens.

Undoubtedly, ocean is one of the Libya’s most valuable natural resources. It can provide food in the form of fish and shellfish.

Fishing is a world industry. If Libya wants, it can cater to the needs of many of the North African countries with availability of fish resources to the people but the industry of fishing, like any other trade, is utterly in a state of negligence.

About 200 billion pounds worth of fish are caught each year worldwide. Today, exports of fish are particularly important for the developing countries and in many cases are higher in value than agricultural commodities such as rice and sugar.

Since Libyan soil is not fertile to grow rice, wheat and other kinds of pulses and vegetables to feed its own population as well as export them to other countries for boosting up its economy, it can well utilize the resource of seawater for fishing. Fisheries are enormously important to the economy and wellbeing of communities.

The sea can be used for transportation, both travel and shipping. Particularly shipping can have a low impact on the environment; it is safe and profitable for economies of the country.

In addition, the sea may also provide alternate and treasured source of potentialities for people in Libya. It is mined for minerals salt, sand, gravel, and some manganese, copper, nickel, iron, and cobalt can be found in the deep sea and drilled for crude oil.

In recent days, tourism is the fastest growing division of the world economy and is responsible for more than 200 million jobs all over the world.

Sea tourism in Libya may result in an economic gain of billions of dollars for the people if serious attention is paid to what has been pointed out to sources other than the source of oil.

It is sad to mention that many of the vital services the ocean provides to the people in Libya were neglected by the previous regime and seem to be in that state of carelessness with the current government in power.

Now Libya is a democratic country with huge expectations of the public to bring it to the stage of viably strong economic power in the region.

The nation cannot become the regional economic power hub unless the government of Libya pays attention to every segment of its resources in its possession.

The seashore resources are one of such valuable wealth to the people here. The overhauling of the practical projects in the direction will have a very positive impact on its citizens and the country.

In the creation of the heavens and the earth; in the alternation of nigh and day; in the ships that sail the ocean with cargoes beneficial to man; in the water which Allah sends down from the sky and with which He revives the dead earth, dispersing over it all manners of beasts; in the movements of the winds, and in the clouds that are driven between earth and sky; surely in these there are signs for rational men. The Koran, Al-Baqara (The Cow) 2:164, Penguin Classics, England.

"At this year’s end let me tell you
What it is that’s on my mind
When the killing fields of Syria
Chill the hearts of all mankind
As my critics are seldom shy
Allow this columnist a cry."

“It is not enough to win a war; it is more important to organize the peace.” ― Aristotle